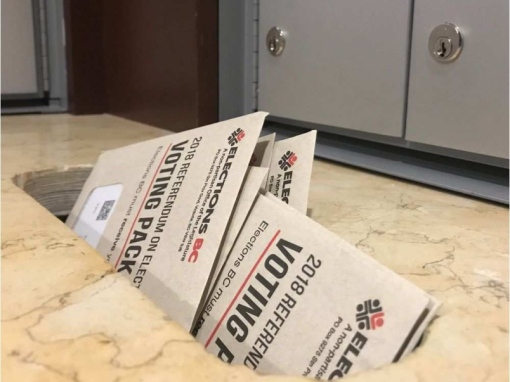 It’s all over but the counting. (photo: Times Colonist)

There are regional variations.  Areas where PR appears strong are Vancouver Island (where the Greens are strongest) and the City of Vancouver. FPTP appears strongest in BC’s Interior.

Ethnicity and language also appear to play a role.  Public polls do not show breakdowns by ethnicity (and I wonder if they are properly represented in sampling), but we can see that turnout has been lower in ridings that have lower English-first language populations, such as Richmond and Surrey.

There has been some interesting analysis conducted by Star Metro reporter David Ball and Langara College professor Bryan Breguet (an unabashed PR supporter) who has a blog called “Too Close to Call”.

Ball tracked the rate-of-return of the mail-in-ballots and compared it to the HST and Translink referendums.  The seemingly slow rate of response at the outset of the process was typical of these processes.

Brequet ran regressions and other analysis to determine who might be voting.  He’s also conducted Google polls, that show the race very tight.  I’m a bit more primitive in my approach so take the following as you will.

Here’s what we know:

1,361,000 ballots were received, and Elections BC has published the riding-by-riding totals for over 92% of those ballots, providing a fairly clear picture of the regional breakdowns.

On the spectrum of turnout for province-wide votes over the past seven years, the PR referendum was low.  Take into account population growth and the PR turnout was even weaker when compared to the HST referendum.

We can also track where the votes came by held-seat.  In the HST referendum, every NDP seat voted against the HST, while half of the BC Liberal seats voted for the HST.  Who represents a seat can be an indicator of support – not because of the MLA, but because of the underlying attitudes that got that party and MLA elected in the first place.  One could reasonably assume that BC Liberal seats will lean FPTP and NDP/Green seats will lean PR.  That will probably be the case writ-large, though there will be exceptions.  (For the purposes of this analysis, I am basing it on held seats as of election night, 2017).

What does this tell us?  The three Green seats over-performed on turnout, while the NDP under-performed.  NDP held-seats in Surrey, for example, had very low voter turnout.  Apparently, voters in Cowichan, Oak Bay, and, Saanich North & the Islands were more eager to receive their ballots than to have a visit from Santa.  But there may be other reasons for that, stay tuned (see below).  The BC Liberal seats held their own, but no advantage in turnout.  Again, those 20 of 24 seats in the Interior held by the BC Liberals did not generate as much in terms of turnout percentage as I would have thought.

In the Lower Mainland, the turnout was highest in Vancouver-North Shore and the Fraser Valley, relative to Burnaby to Mission corridor and Richmond to Surrey corridor.

It is a consistent truth in Canadian elections that turnout is higher among older people than younger people.  In the 2015 federal election, there was a bigger turnout among all age groups, but the old geezers still outpaced the Millennials.

Let’s look at turnout-by-age in the 2017 provincial general election.  Work with me here.

Chart 1: Turnout by Age, 2017 BC provincial election (source: Elections BC)

So, the question is, given that public polls indicate a strong preference among seniors for FPTP, did old voters rule the roost in the PR referendum too?

Bryan Brequet from Too Close to Call has undertaken some analysis and he sees a trend toward more younger voters.  I think what he means is that the gap between younger and older voters in the PR referendum may not be as pronounced as the 2017 general election.

So here’s what I did…

I ranked the ridings 1-87 in terms of turnout in the PR referendum.  Parksville-Qualicum is #1, at 46% turnout. Surrey Whalley is #87, at 18%.  (This is, as of, 92% of ballots being screened.  Turnout by riding will increase but the ranking of ridings 1-87 will probably not change that much).

Then I took BC Stats data and looked at the 18-44 population per riding.  I ranked the ridings 1-87 in terms of their proportion of 18-44s relative to the overall adult population of the riding.

Older People vote more … but what does that mean?

If I’m right, and a similar pattern exists in this referendum as it does in most general elections, then it’s good news for FPTP.  But there are definitely some mixed messages.

One of the oldest ridings is Saanich North & the Islands represented by the Greens.  Will older people deliver this riding for FPTP or will the Greens deliver it for PR?  I think it’s both.  I’m sure the Greens will have worked hard to deliver votes there (they get elected there for a reason), but age will be a bit of a mitigating factor.  This could be the story of the Island – an inexorable pull to PR by the Greens (and to a lesser extent, the NDP), restrained by a sizeable population of old geezers.

In older, BC Liberal-held Lower Mainland ridings like Delta South, West Vancouver-Capilano and White Rock, you might see some of the largest margins for FPTP.

If it is 50-50 in the polls, and if public polls are correct in so much as older people favour FPTP and younger people favour PR, and IF an age turnout factor is present is as above, then 50-50 becomes 47-53 or even 45-55 in favour of FPTP.

However, if PR has burst through, and if it has weakened opposition among older people down the home stretch, and made a breakthrough with 35-54s, then overall support of 55% among eligible voters may translate to just enough (50% +1) among those who actually voted.

What does this tell us? We can hypothesize that election materials were not accessible to some voters, or was not debated as extensively in their language (via media) compared to English-speaking media.  Unlike turnout-by-age data supplied by Elections BC, we do not have comparable data for ethnicity or language.  I can merely point out the correlation.  Anecdotally, the HST referendum appeared to have had a high level of engagement in the Chinese community, owing in part to mobilization of Chinese restaurateurs who opposed the tax.  It’s fair to say, I think, that the PR referendum did not hold the attention of the Chinese media (or Punjabi media) like the HST issue.

While Chinese voters tend to favour the BC Liberals, historically, and voters from Punjabi-speaking households have leaned more to the NDP over time, the Greens are clearly weaker in these communities relative to support they have elsewhere.  Therefore, one could argue that lower turnout in parts of Surrey, Richmond, and other Lower Mainland areas might be good news for PR, if you think you are more likely to find PR voters where the Green Party finds more fertile territory, generally.

The voting is done.  I made my case for FPTP (“I was a Teenage Vote Splitter“) and have also pointed out how PR advocates should be careful what they are wishing for.

I think the final result will be close.  I think there was momentum toward PR in the final weeks which helped close a (perceived) gap.  For PR to win, it will have had to have done quite well with 35-54s (assuming young and old cancel each other), and have won the Lower Mainland (assuming Island and Interior cancel each other).

If PR does win, then it will have likely done so with less than 22 to 23% of registered voters.  We can debate the legitimacy of that if it happens.  Gordon Campbell had set a 60% threshold which seemed to be a reasonable threshold for a fundamental change to the electoral system.  The current government obviously thinks otherwise!

I do not think 42% turnout is enough for PR to win with a majority.  I think they needed more voters to flood the polls.  I expect FPTP to win by a few whiskers, a few grey whiskers.  We will know soon enough.