Monday’s by-elections can be viewed as a win for the governing Liberals.  They held two seats and won a third from the Conservatives.  In answer to my November 20th post, the voters in South Surrey-White Rock gave like Santa to the Liberals and passed out votes like Scrooge to the Conservatives. 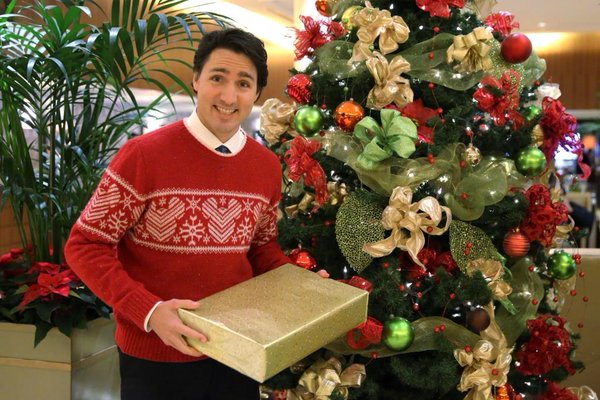 That present is from South Surrey-White Rock

By-elections are a great opportunity to send a message.  If the government is screwing up, why not vote against them and shake it up?  Evidently, there’s not a lot of voter anger in South Surrey-White Rock.

In Monday’s by-elections, the only riding where the Liberal popular vote actually went up was South Surrey-White Rock, which was the only place the Conservative vote went down.

Andrew Scheer’s Conservatives can take some consolation that they reduced the margin-of-victory in Scarborough-Agincourt from 13.9% to 8.9%, and they scraped themselves off the basement floor in Newfoundland, though they haven’t found the stairs yet.  In Saskatchewan, like Alberta, they ran up the score, which is nice, but not very meaningful.  As for the Liberals, I doubt they are too concerned about the ridings where they slipped.  In all three cases, the result looked inevitable, and tough to motivate voters in that case.

South Surrey-White Rock should sting a bit for the Conservatives.  This was a safe seat in 2011 and for decades before that.  In 2011, a backbench Conservative MP edged the Liberal 53% to 19%.  That’s a remarkable turnaround in six years.

The notion of a Liberal win was unthinkable in the summer of 2015.  Liberal strategists had a hard time believing the numbers they were seeing from that riding, against Dianne Watts no less.  They almost beat her despite sacking their candidate halfway through the campaign.  The Liberals had no history of winning there.  They couldn’t even win in Surrey during Trudeaumania I when they took two-thirds of the seats in BC – and the Liberal candidate was “nursery man” Bill Vander Zalm.  Trudeaumania plus the Zalm?  How could they lose?

So, there has been a change in South Surrey-White Rock and it remains to be seen if it will be a sea change.   Liberals may have a bit of deja vu when it comes to winning federal by-elections in BC.  In 1998, a Reform MP resigned in Port Moody-Coquitlam and, very similar to South Surrey-White Rock, the Liberals ran a popular mayor, Lou Sekora, while the Reform Party ran a parachute candidate from Langley.  Sekora won in a riding the Liberals had not held in a long, long time.  In 2000, a young whippersnapper by the name of James Moore defeated Sekora and went on to hold the seat for 15 years.

Let’s not forget about the NDP.  In Monday’s by-elections, their share of vote dropped in all four races.  While none of these seats were NDP targets, they certainly did not demonstrate any grassroots enthusiasm for the new NDP leader.

Congratulations to Gordie Hogg and the Liberals.  We’ll see if success in South Surrey-White Rock is fleeting or not.  Andrew Scheer and the Conservatives did not collapse, on the contrary, they made some incremental progress.  But where it mattered, they could not rally their base to withstand a vigorous effort by the Liberals.  Now that the government is in the back nine of its mandate and showing its resilience, Scheer will not be able to count on the government losing the election – he will have to try to find a way to win it.  A tall order for any Opposition.

There have been seven by-elections in Canada in 2017 so far, with four more to come today (December 11th), including a hotly contested race in South Surrey-White Rock. 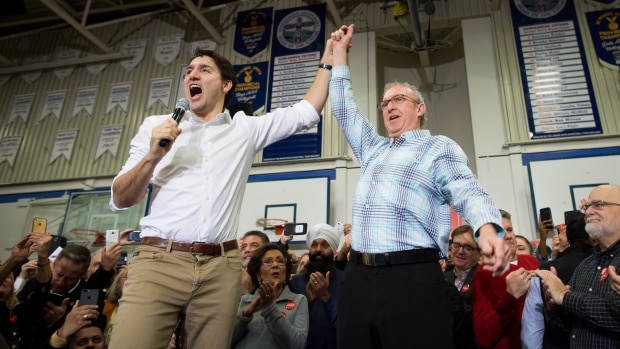 Will Justin Trudeau and Gordie Hogg be cheering tonight?

Are there any trends?  Any signs that may predict outcomes tonight?

First, you have to look at Alberta separately.  Three Conservative titans resigned their seats – Rt. Hon. Stephen Harper, Hon. Jason Kenney, and Hon. Rona Ambrose.  One might think the loss of those candidates would depress results in a subsequent election.  Wrong. The Conservatives scored over 70% in each seat, surpassing already strong 2015 numbers.

Moving on to Quebec where there have been two by-elections, it’s a very different story.  The Liberal Party held most of its vote in St. Laurent (Stephane Dion’s seat), and in October, doubled its vote in Lac St. Jean to take a Conservative seat held by Denis Lebel.  Unlike Alberta where support for the Blues was amped up, les bleus went the other way in Lac St. Jean, dropping from 33.3% to 25.0%.  Les oranges dropped in Lac St. Jean from 28.5% and second place to 11.7% and fourth.

Finally, there were two by-elections in Ontario in 2017.  In both cases, the Liberals only retained about 90% of their 2015 vote, but nevertheless held a majority.

Overall, it’s a pretty good result for the governing Liberals thus far.  Holding on to their own seats while taking one in Quebec from the Conservatives.  Running up the scoreboard in Alberta does little for the Conservatives.  Their numbers in the 2015 election were already through the roof – the Harper Conservatives had 375,000 more votes than the provincial PCs and Wildrose combined.  The Conservatives are in danger of becoming ‘Alberta Island’ if its numbers drop in the rest of Canada but increase in Alberta.

Here are the 2015 election results for the four by-elections:

Bonavista and Battlefords both appear very comfortable for the Liberals and Conservatives respectively.  It will be interesting to see if Battlefords-Lloydminster follows a similar pattern as the Alberta by-elections.

Scarborough-Agincourt is tighter and will be the first real test of Jagmeet Singh and whether he has any game in the Toronto outskirts.  You would think the NDP could do better than 7.9%.  That could help Andrew Scheer’s Conservatives, and a win there would be huge, but they are certainly downplaying expectations.

I looked at South Surrey-White Rock in detail a few weeks ago.  A strong candidate for the Liberals and lesser-known candidate for the Conservatives is the reverse scenario compared to the 2015 election.  With a thin margin, the Liberals could prevail this time on the candidate match-up alone – everything being equal.  Two years into a mandate, you would think this would be a vulnerable time for any government.  Given the prolonged controversy over small business taxation in the summer and early fall, one might also think that that issue would hurt the Liberals in the upper-income, professional enclave of South Surrey-White Rock.  We won’t know until the polls close if it did – and if Hogg does win, one can ask, “What was that all about?” – a big national issue that had no teeth.

I was surprised that the Conservatives reached back to 1993 to attack Hogg on an issue that had been dealt with conclusively in his provincial by-election win in 1997, when his main opponent was a BC Reform candidate.  That appeared to be the move of a campaign running out of steam.

A Liberal win tonight in BC – and in Scarborough – will be an impressive show of strength by a mid-term government.  Not a guarantee of future success, but a sign of resilience, and an indicator of the magnitude of the challenge facing Andrew Scheer.  His pathway to winning the next election will be made more difficult not by the actual reality of a by-election loss, but by the perception of that loss among his own supporters (I’ve been there).  He’s going to have to demonstrate how he can build his party’s market share beyond Alberta and its diminishing strongholds across the country.  But hey, low expectations can be very beneficial (I’ve been there too).

Jagmeet Singh will also take away some lessons tonight.  He hasn’t been on the job long, but he did enjoy considerable positive publicity in the lead up to his election.  Can he translate that into votes?  You would think the NDP should get a little bump with Singh in place.

Tonight’s results will be another marker on the road to 2019 and, so far, the electoral road has looked fairly smooth for the Trudeau Liberals.

There has been a thick fog enveloping Vancouver this week.  My mind always turns back to stories my mother has told me about the Vancouver fog in the 1940s.  The fog, she says, was so thick that my grandfather would have to get out of the car to find the bridge so that they didn’t drive into the Fraser River.  You literally could not see the hand in front of your face.

I’m not an air quality expert, but this photo from the City of Vancouver archives (1936) of the sawmills on False Creek tells a large part of the story.   In weather conditions like today, the pollution would exacerbate the fog.  Add to that home heating – people burned coal and wood to heat their homes.  Despite the huge increase in population over the years, natural gas and electricity have led to huge improvements in air quality. 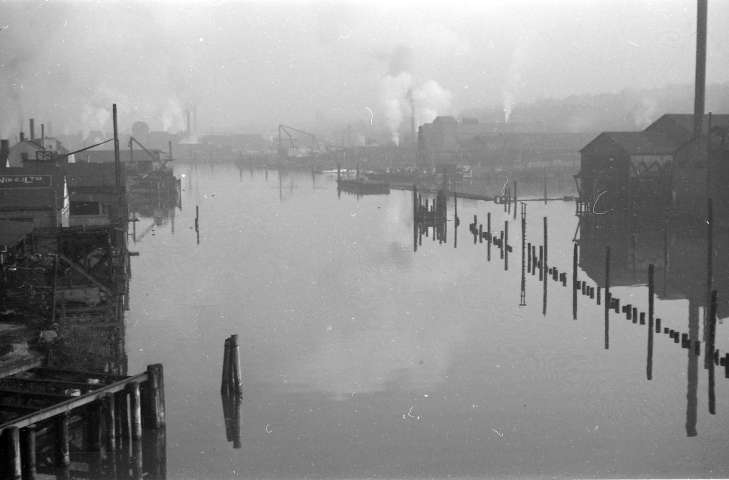 Which leads me to the story of the Vancouver fog and the future prime minister.  Round about the time my mother was sitting in the car waiting for my grandfather to find the bridge, John Turner was attending the University of British Columbia.  He was a phenomenon.  The phrase “Big Man on Campus” was probably  invented for him.  Paul Litt’s biography of Turner, Elusive Destiny, chronicles his early years at UBC and his triumphs in academia, sports, and student life.  He was awarded a Rhodes scholarship upon graduating from UBC.

According to the UBC Sports Hall of Fame, Turner was one of the three fastest men in Canada between 1947 and 1949.  He led UBC to two Pacific Northwest Conference track championships and his Canadian-best in the 100 and 200 yards qualified him for Canada’s 1948 Olympic team. In June of 1947, at a track meet in Seattle, Turner recorded the fastest time by a Canadian in the 100 yard dash, covering the distance in a UBC record 9.8 seconds.

What does this have to do with fog?

In 1948, at the peak of his athletic career, Turner was on his way home from attending a football game in Bellingham.  He lived near UBC on Vancouver’s west side. Paul Litt tells the story in Elusive Destiny:

As they passed over a level crossing on Arbutus Street in Vancouver, a train appeared out of the heavy fog. “We were lucky we were only hit in the front of the car and not in midship,” Turner recalled. “I saw this light coming out of nowhere and was able to turn and roll with the train as it hit us.” The train was not moving rapidly, but it still drove the car a hundred feet down the track. Turner’s left knee was smashed. Surgeons were able to piece it back together, but his leg muscles atrophied as he waited for the bone to heal. By the time he could run again, it was too late to train for the Olympic trials in Vancouver that June. He showed up anyway and gave it a shot, but his knee gave way and he collapsed on the track.

The Vancouver fog dealt a punishing blow to Turner’s Olympic hopes, but he would go on to have an outstanding career in politics and serve as prime minister – and the first PM with a British Columbia pedigree.  He represented Vancouver-Quadra for 9 years and must have cursed the Arbutus Line every time he crossed it.

So, enjoy the fog today, it’s not as bad as it used to be.  And while the trains may be gone, watch out for those bikes on the Arbutus corridor!