USC is running a rolling track poll where they interview 300-400 people a day (online) right through to Election Day.  This is a serious poll with serious methodology.  The numbers shown daily represent seven days of tracking. Each day, the daily results from 7 days ago drop off and the current day is added, making it a rolling track.  This smooths results and shows more of a trendline rather than sudden shifts.  So, if there is a big move, it might not become fully apparent for several days.

For the past 7 days, Donald Trump’s support has increased to, now, a 7 point lead.  This includes several days now of the Democratic National Convention.  Trump certainly had an RNC  Convention bounce but yet to see a Dem bounce.

Some Democratic pundits have cautioned against “bedwetting”.  Yes, it’s July.  There’s a long way to go.

The issue the Democrats have to confront, however, is that Trump can win.  There has been a lot of commentary about how it’s impossible for Trump to win because of lack of support among Hispanics, Blacks, women, etc.  However, he is crushing it with whites and males.

Here is a breakdown of the numbers to show how Trump is rising:

While Hillary Clinton is still seen as the likely winner by 49% to 45%, that gap has narrowed from 13 points to 4 points in the past 17 days.  More Americans are believing in the possibility of a Trump presidency – will that help or hurt Trump?

Trump leads white Americans 57% to 31%.  African-American voters are 81% to 4% for Clinton.  Hispanics, though, are reported at 50% to 37% for Clinton.  This is where one might wonder if the poll has a large enough, or representative, sample of Hispanic voters.  Or maybe that’s reality – are gender and age are ‘trumping’ race among Hispanics?

What does it all mean?

The challenge for Democrats is to approach the race for what it is – a very unconventional campaign.  Trump is attracting voters who are very anti-establishment including alienated Democrats.  How many more examples do we need to see – Rob Ford, Brexit, Jeremy Corbyn, Bernie Sanders, and Trump himself – to understand that there is a very large constituency for those who tap into the vein of frustration, resentment, and anxiety?

This rise in Trump support may be short-term.  It may be illusory.  It may be overstated.  But it proves that Clinton is no shoo-in.   The presidential campaign has been very unkind to her personal popularity and favourables.  Bernie Sanders did a lot to soften her support and drive votes away.  She has gone from a plus 10% to minus 17% in two years.  At her peak back in 2008, she had 69% favourable rating. 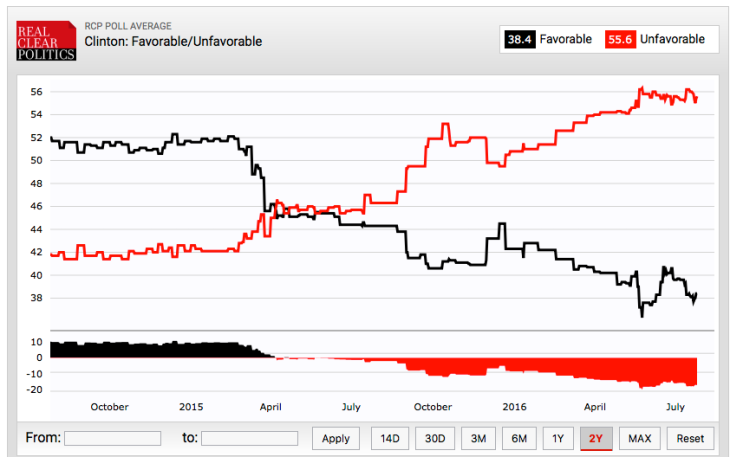 So, the first thing Democrats have to face is that they have a problem.  Now, deal with it.  If the DNC Convention does not move the dial, then it’s time for Plan B, whatever that is.