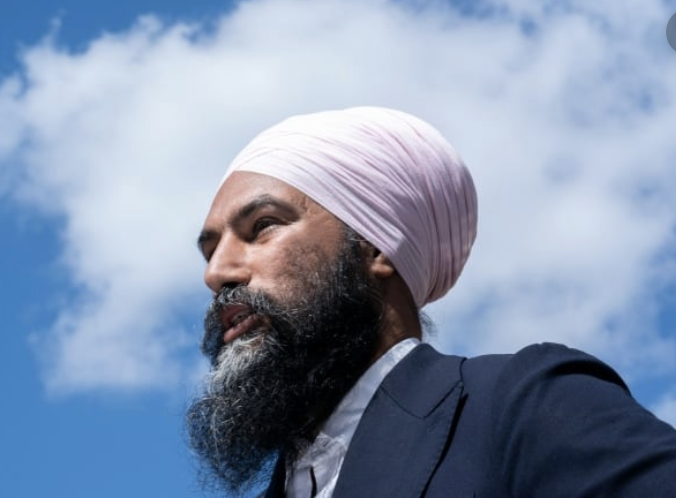 Jaggernaut.  Jagmentum.  Jagmeet Singh has been the story of the campaign since the English-language debate – in English Canada – where the NDP, for most of its history, has won its seats.

Until 2011, the NDP’s political game plan was all about Canada outside Québec – the rest of Canada (ROC). It has only won multiple seats in Québec twice – the previous two elections.  Historically, NDP vote in ROC ran far ahead of its vote in Québec. But in 2011 and 2015, that equation changed, with NDP vote in ROC running behind the national number, because of NDP strength in Quebec. 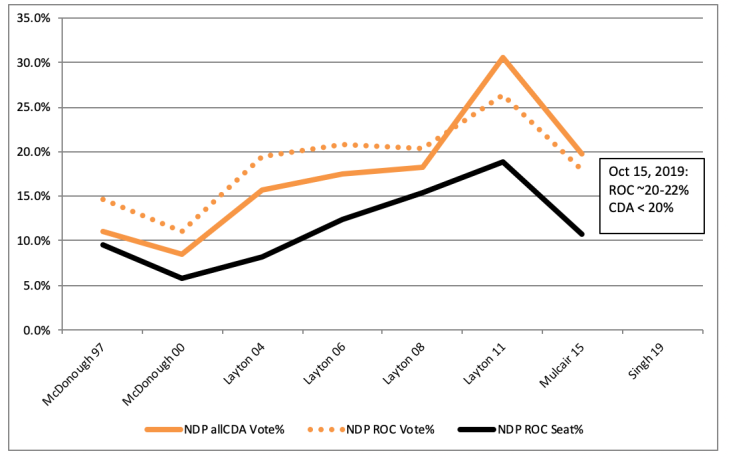 Layton’s Quebec surge of 2011 did not translate the same way in ROC. Even at its peak in 2011, the NDP was only at 26% of the vote in ROC, which translated into the NDP winning only 19% of ROC seats, running well behind the Harper Conservatives. Happily for the NDP in that election, 59 seats of the 75 seats in Quebec went orange, more than doubling their best-ever seat count in a federal election.

Clearly, the NDP leader has been the recipient of well-deserved positive media coverage since the English debate, and he has campaigned well throughout the writ period.  How does it translate into seats?

In ROC, the NDP looks to be at or above where it finished the 2015 election under the leadership of Thomas Mulcair.  However, they will likely lose all or almost all of their 16 seats in Québec.  That’s a lot of seats to make up in ROC, especially when they are still a fair distance below the historic ROC highs of Jack Layton’s 2011 campaign (44 seats) and Ed Broadbent’s effort in 1988 (43 seats in ROC).  In other words, to come out even in this campaign with 2015 (which was a disappointment that caused the resignation of Mulcair), Singh will have to pull off a record performance in ROC.

Even if Singh’s NDP pushed it to Laytonesque levels (26% in ROC), the NDP would still be far behind the major parties.  As it sits right now, the NDP may be the fourth place party in the House of Commons behind the Bloc Québécois.

The more impactful consequence may be the NDP feasting on Liberal votes in suburban battlegrounds where the Conservatives stand to benefit.  NDPers can also rightly assert that their rise may come at the expense of Conservatives in other places, such as the BC Interior where two NDP incumbents face tough re-election battles.

The campaign momentum is surely a welcome reprieve from the doom many NDPers feared.   To their credit, the federal NDP has finally shaken off its extended phase of self-destruction and unsteady start of Mr. Singh. It was only four years plus a month ago that the NDP were on the very verge of power with Thomas Mulcair.  Now, here they are celebrating momentum that will deliver, what, 30 seats?   Singh’s comeback started with winning the Burnaby South by-election, and, now, the NDP has stabilized itself on a footing very consistent with its history, but a long way from what a 2015 pathway looked like: Quebec domination plus seats in all regions.

So, who is really cheering Jagmentum in the final week? Scheerly, you can figure that out.