Heading into Thanksgiving weekend, Canadians will be carving up poll results.

One pollster in this campaign has provided daily results – Nanos Research.  No pollster is infallible – quite the opposite – but Nanos does provide a body of work to observe trends.

I decided to look at four aspects of Nanos’ work: the national race, regional races, age, and gender.

On methodology, unlike a lot of other pollsters, these are live telephone interviews.  The sample includes land lines and cell phones.  The data is weighted but the weights are not unreasonable.  Nanos completes 400 interviews per night and reports a rolling three-day result (n=1200) each day, which smooths out the bumps if there are anomalies.  Once you break the data down into subsets, margins of error rise, so bear that in mind.  Overall, it’s a robust program.  Larger sample sizes would be ideal, but beggars can’t be choosers.

The charts below are from Nanos’ interactive data portal (unless otherwise stated) and each chart represents the last 30-days of polling.

The story of the past week has been that the Liberals are winning the Anti-Harper primary- they are winning the battle as to which opposition party has the best chance of unseating the Conservatives. 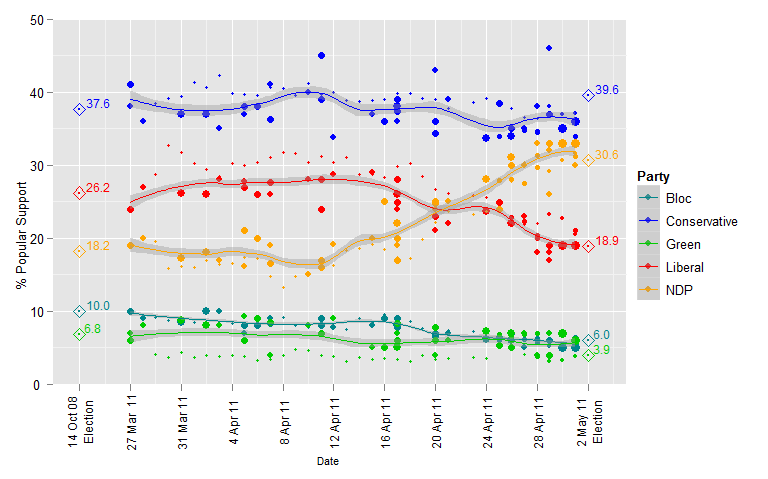 This graph, borrowed from Wikipedia’s 2011 federal election write-up, shows a similar phenomena where the two parties diverged, but that time it was the NDP on the rise and the Ignatieff Liberals in free-fall.  That divergence started about 16 days before Election Day.

2.  The Regions – Fortress NDP is under attack, Binary race in Ontario

The NDP’s flagging national numbers derive in part from their deterioration in Quebec.  The story here is 10-point drop since September 25th, and a fall of 20 points since September 9th.  The Liberals are posed to gain seats by simply holding ground, while the Bloc have doubled their vote since September 25th.  With 59 of 75 seats in 2011, the NDP is counting on repeating its success and, until recently, it looked like it would, until Prime Minister Harper injected the niqab issue into the campaign.

While Quebec sorts itself out, the NDP are many lengths behind in Ontario:

Where 7 points separated the Liberals and NDP on September 25th, the gap is now 22 points (41 to 19).  This is a two-race in Ontario between the Liberals and Conservatives, with Liberal hopes of gaining the keys to 24 Sussex contingent upon pulling away and racking up a major seat differential here.

BC continues to be a key battleground.  The BC sample size is smaller and more volatile.  With only 180 interviews, the margin-of-error is plus/minus 7.3%, 19 times out of 20.  The key takeaway is that there is a three-way battle.  My view is that the Conservatives appear low right now and likely have more strength.  If the Liberals hang in to garner 30% on Election Day in BC, then they will score a significant increase in seats, from the two they have today to upwards of 10-12.  When there is so much volatility, outliers can get elected.

The Prairies continue to look strong for the Conservatives; the Atlantic very strong for the Liberals.  The dynamism of the race is in the three largest provinces.

Since September 25th, the Liberals have been gaining among women at the expense of the NDP, doubling their lead over the NDP from 9 points to 18 points.  This trend started a week earlier after relative a period of parity between the parties.

Nanos’ numbers indicate that men have been leaving the NDP, bumping up Conservative numbers somewhat.  Whether that is a move directly from Orange to Blue, or a bumping effect involving the Liberals and Bloc is hard to say.  The Conservatives had a 4-point edge over the NDP among men on September 25th and are now at 11-points.

I’m less bullish looking at age groups because of sample sizes, but we’ll take a look at the two oldest cohorts.

50-59 year old voters show a decided divergence between Liberal and NDP.  We’ll see if this holds up or if it’s an anomaly.  Given high turnout of plus 50 voters, this is significant.

And with 60 plus voters, the Conservatives are on top while the NDP are far behind.

And now the caveats

That’s a lot to hang on one pollster’s work.  Doubtlessly, other opinions will come forward this week.  Only Nanos shows a 5 point Liberal lead and Nanos is only pollster who has reported from the weekend (by the way, weekend results can be a little flakey sometimes, in my opinion).  Innovative and Leger showed Liberal leads of two points last week, while Angus Reid Institute and Forum showed clear Conservative leads last week.  Different pollsters, different methodologies (Innovative – online, ARI – online; Forum – IVR).

Then there is turnout.  That the Liberals are performing well in the polls among 50 plus voters is significant.   Turnout increases significantly with age, peaking in the 65-74 year old age group.  (See my post on The Grey March).  Liberal strength vis a vis the Conservatives in the 50-59 age group is a bit surprising and is a category to watch.

I have also raised the possibility of sample skew given that a proportion of respondents simply won’t say who they will vote for.  They could be weighted toward one party, against the grain of the overall results.

This election is far from over.  Disruption could occur over the Trans Pacific Partnership or any other issue that comes along.  But this is a critical week for a couple of reasons:

The Nanos results speak to a major challenge for the NDP.  They will need to rally their own troops while winning back market share.  The inevitable grumbling by party activists is likely happening as they watch the daily seepage of their poll numbers.  So far, they are keeping a lid on dissent.  A lot can change in 24-hours and they need to find an issue that turns the momentum on its head … or hope for a Liberal and/or Conservative gaffe.

The Liberal concern would be that they are peaking and cannot sustain the growth.  Justin’s performance on the campaign trail has been lauded, benefiting from the low expectations his rivals created for him.  He needs to beat the stuffing out of the NDP heading into Thanksgiving weekend, so to speak, and set up the definitive Red-Blue showdown next week.

Harper is not in a bad place.  Ontario is competitive, they may gain ground in Quebec, and may still recover most of their seats in BC.  They need to pull away with older voters.  What they cannot control are NDP voters deciding to flee to the Liberals to stop them.