This week’s by-election made me a bit curious about Chicoutimi.  It’s a long way from my perch on the west coast and probably even further in cultural terms. Turns out to be a pretty interesting riding in terms of its political history and volatility.

The riding boundaries have changed over time but I have gone with the main Chicoutimi riding to see the overall trends (purists alert – this is not precise, just directional).  Since Diefenbaker, Chicoutimi has gone Creditiste, Liberal, PC, Bloc, PC, Liberal, NDP, Liberal, and, now, CPC. 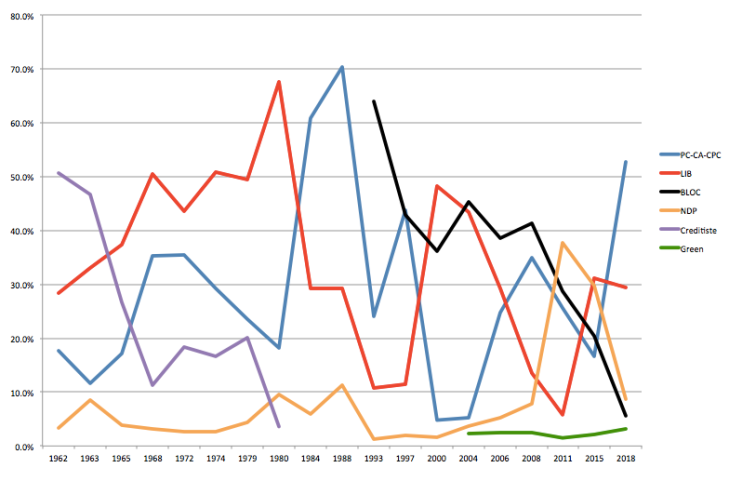 Here’s a closer look at elections since 2000…

As the charts show, there has been huge volatility over time.  Parties swing from domination to destruction.  For the NDP, they managed to go from 8% to winning with 38% and back to 9% over four elections.

The Conservatives were lower than a snake’s belly in 2000 and 2004, and only at 17% last election, but clearly their candidate in the by-election did an excellent job drawing support.  The question is: are we also seeing a consolidation in Quebec between the Liberals on one side and the Conservatives on the other, feasting from the remnants of NDP and Bloc support?

I will leave that to others to judge. Quebec politics is definitely above my pay scale.

On a national basis, if the NDP collapses in Quebec, it will have an impact on their national effort.  The NDP had one-quarter of the vote in Quebec in 2015, with Quebec representing about one-quarter of the national population.  That’s good for about 6% nationally in the popular vote.  Chicoutimi-Le Fjord dropped from 29.7% (above Quebec average for NDP in 2015) to 8.7% in the by-election.  Not to read too much into by-elections, but if the NDP slip to 10% province-wide in the next election, that drops their national share of the vote by about 4%.  That means they are going to look more like a third party that can’t keep up with the Liberals and Conservatives, whereas in 2011 and 2015, they were at the main table.  The Layton legacy is in real jeopardy and that will have consequences across the country unless they can find new voters elsewhere. The Tom Mulcair days are looking pretty good right now.