For some months I have sounded the alarm bells that Donald Trump could win the presidency in spite of breaking every rule of conventional politics.  Every time I second guess that opinion, he roars back with another lunge to the throat of the Clinton campaign.

Today, RealClearPolitics has it at 304 Clinton, 234 Trump.  This is a significant improvement for Trump over last week.  Nate Silver has upped his odds of a Trump win to about 1 in 5. But of course, this is based on polling data – and there is a litany of polling debacles in recent years.

Mitt Romney had 206 electoral votes (with 270 required to win).  Right now, Clinton is leading in North Carolina and Arizona, where Romney had prevailed.  If Clinton, holds the lead in those states then Trump is almost certainly finished.

Trump has consistently led in Ohio, which Obama won twice.  That’s 18 votes.  He is close in Iowa (6) and, now, RealClearPolitics has a GOP advantage in Florida (29).  There’s 53 new votes combined.  He may pick up one vote in Maine (1) where it’s one of two states that is not a winner-take-all state.  When added to Romney totals, that’s 260.

The final 10 votes are the hardest.

It’s not impossible, though it is unlikely. The polling shifts become less and less relevant due to early voting.  Trump leads in Florida but many Floridians have already voted, perhaps locking in a Clinton victory.  Secondly, Clinton has a much stronger ground game. That may make the difference alone.  But Trump supporters have zeal which is a hard thing to measure.  He has defied conventional wisdom and we don’t know how bad (or good) the upcoming week will be for Clinton.  Just when I thought Trump was finished, he continues to haunt this campaign.

Obama campaign manager David Plouffe says not to “fret and wet”, that Hillary has a solid 300 votes, and that there is a 100% chance she will win.  So there’s that. 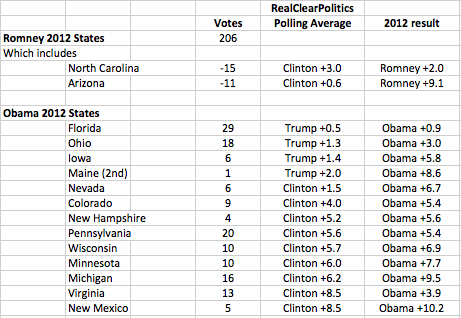 Hillary is in a strong position but it is uncomfortably close.

And finally, for reference…

Table 2: US presidential elections since WWII