“Glorious and Free” is the Manitoba motto.  Free of the NDP by midnight Tuesday, I’ll bet, though not very gloriously.

Despite some late controversy over the Manitoba PC leader’s sojourns to Costa Rica, available evidence seems to indicate it’s the NDP that will be heading to sunnier climes come Tuesday night.  The recent TV debate did nothing to motivate NDP and Liberal voters and, if anything, opened up the Greens as a protest vehicle for centre-left voters.  For British Columbians, some parallels to 2001.  Voters seem focused on getting the job done despite reservations with the leading party.   See my earlier analysis here. 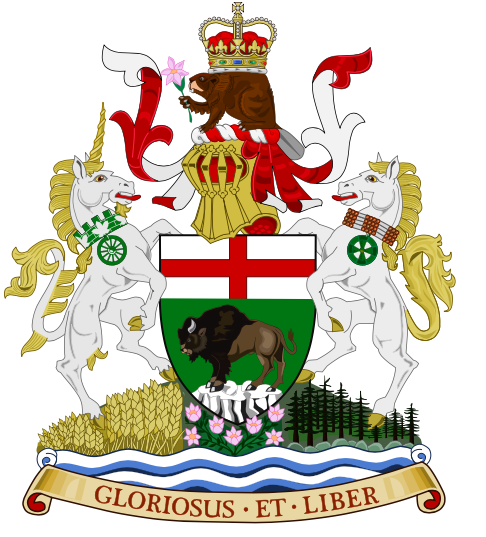 They have unicorns in Manitoba – maybe the NDP have a chance?

The Liberals held the seat of their then-Leader Jon Gerrard and received 7.5% of the popular vote.

While the PCs won rural (non-Northern) Manitoba by 22 points, they couldn’t crack Winnipeg. The NDP harvested 51% of the votes in Winnipeg, powering their majority and added to their seat count with their base of support in Northern Manitoba where they took 61.4% of the vote across five seats.

The following table ranks the ridings in order of percentage of NDP vote from the 2011 election.  The NDP scored 73.2% in The Pas.  They won 8 seats by over 60% and a further 25 seats by over 50%.  The remaining four seats were in the 45-49% range.   In many jurisdictions like BC, Alberta, and federally, you will see instances of elected members with 30% or less.  Manitoba has been very polarized.

The PCs look poised to win a bushel of seats from the NDP in that group from 45% to 60% (NDP vote in last election). The NDP seats in the plus 60% range may hold.

High profile NDP candidate Wab Kinew, embattled by campaign controversy, is running in Fort Rouge against the Liberal leader Rana Bokhari.  This would be a seat that the NDP ought to lose given the trend in the numbers.  The Liberal leader is out of the picture, it seems. So the PCs could emerge as the winner here.

The Green Leader James Beddome is seeking a seat in Fort Garry-Riverview. A bit of a stretch to see a Green win, but not a surprise to see a decent second.

In the table below, NDP supporters will not want to see any PC wins until much further down the list.  A PC win in a riding that was plus 60% for the NDP last election would be a very bad sign.