With the April 19th provincial election looming, the Manitoba NDP is in a dire situation.  It’s not much better for the Liberals.

The PCs have a substantial lead according to most polls.  They have maintained a comfortable margin over the NDP.  Earlier in the campaign, the NDP may have been more preoccupied with the Liberals cannibalizing their vote.  Instead, the Liberal leader has tanked and it hasn’t helped the NDP much.

It coulda been ’88 all over again

I campaigned for Sharon Carstairs in 1988 when she zoomed from one seat to twenty and Official Opposition status.  It was a Prairie brush fire.  She darn near won the election, and did in fact force a minority government.  The election had major national implications.

Like the 2016 election, there was a deeply unpopular NDP government.  There was a Liberal Party that was rising in the polls.  And a PC leader that had mixed reviews.  The NDP lost a vote in the Legislature (defeated by their own Speaker) precipitating an election.  Premier Howard Pawley resigned and called a leadership convention, which elected Gary Doer.  Doer, against common practice, was not sworn in as Premier.  He led the Party into the election to a third-place finish.  At least renewal in the NDP was underway.

This election has been far different for the NDP.  The incumbent Premier Greg Selinger faced an internal revolt and beat back the dissidents in a leadership review and limped into the election.  Renewal postponed.

Enter Sharon Carstairs.  She held her own seat in the Legislature, a minor miracle for a Liberal on the Prairies to be elected in the 1980s.  She built the Party up and stood out as a strong opponent of the Meech Lake Accord, aligning with prominent national opponents  like Jean Chretien.

As a Young Liberal in the day, I drove across the Prairies with my buddy Iain in his Ford Escort to support an improbable breakthrough.  We door-knocked for Liberal candidates like current MPs Kevin Lamoreux and Jim Carr, and former BC Liberal MLA Gulzar Cheema – all who ran in that campaign.  And many others too – let’s just say, there were a lot of “characters” running in that campaign.  Current MP Terry Duguid was the Liberal executive director then.

Carstairs seized the agenda during the TV debate and never looked back.  Momentum that was building, exploded (Gordon Wilson followed this playbook in the 1991 BC election).  She raced to the top of the polls.  When the dust settled, Carstairs won much of Winnipeg, but was held off by the PCs who used their rural muscle to win a plurality of seats, albeit a minority. 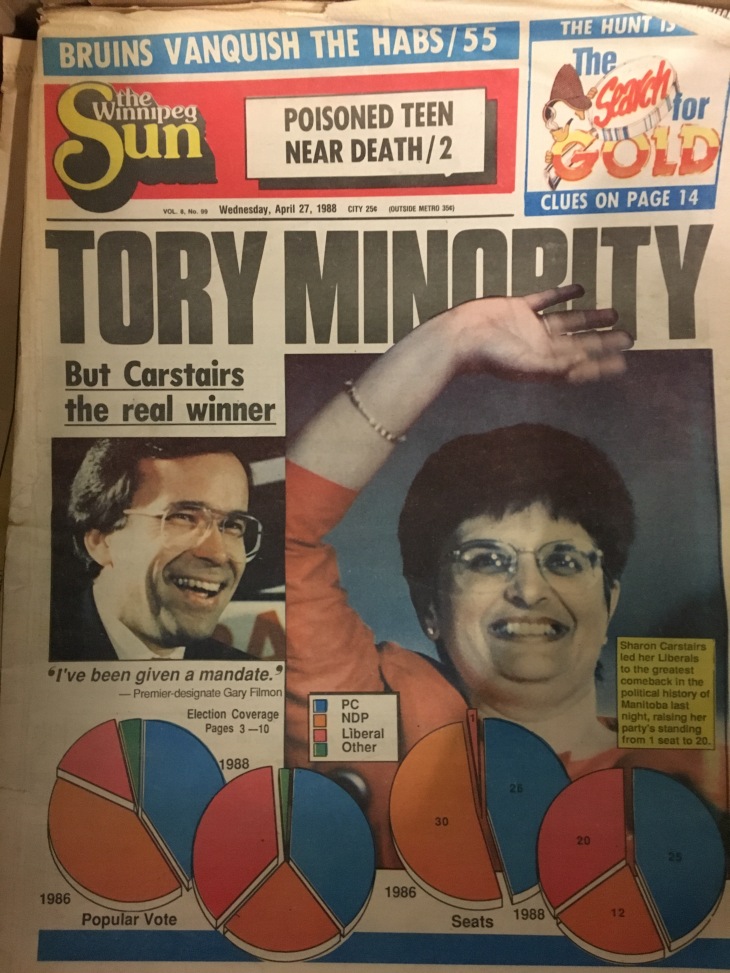 Carstairs strong opposition to Meech Lake pushed the Filmon government into taking a much tougher position.  The three leaders – Filmon, Carstairs, Doer – were all in Ottawa for the constitutional showdown in June 1990.  They brought the final deal home to Manitoba where Elijah Harper defeated it, and in doing so, killed the Accord.  Do elections matter?  In this case, the Liberal surge in 1988 changed the course of Canada’s constitution.  Meech may have happened with a Filmon majority.

So, why isn’t it happening this time?  The conditions are there.  Deeply unpopular NDP with a lot of of centre-left voters shopping for an alternative.  The PC leader Brian Palliser is perceived as less moderate than Gary Filmon.  His leadership numbers aren’t bad but they are not great either.  And the federal Liberal brand is far, far stronger in 2016 than it was in 1988.

It boils down to the Liberals.  Sharon Carstairs was a crackerjack leader.  She ultimately could not sustain the growth in Liberal support, but she was the right leader at the right time in 1988.  From my perch going from riding to riding, I detected real enthusiasm from the grassroots and strong leadership in the campaign.  It was loose, it was fun, and everyone was going with it.

This time, the Liberal leader Rana Bokhari has struggled.  Mainstreet polled following the TV leader’s debate on April 12th.  She was a minus 40 on impressions; NDP Premier Greg Selinger was minus 32.  Brian Palliser was a net zero.  That’s a lot of collective disappointment for the voters.  The Green leader James Beddome scored the best.  Her high polling numbers pre-writ masked underlying weaknesses that have been exposed during the writ period.  In 1988, had social media existed, I’m pretty sure some of the guys who got elected as Liberals would not have made it to the ballot box (I could tell you about the guy with mirrors on his ceiling).  In 2016, the Liberals lost six candidates, which blows you off message pretty quickly.  And was there a message?  Not apparently.  Compared to Carstairs, she wasn’t ready.

Palliser also has the good fortune of not having a federal Conservative government in power.  Filmon was plagued by Brian Mulroney who had moved a huge CF-18 contract from Manitoba to Quebec.  If there is a Harper hangover, it hasn’t hurt him too much.

After 1988, Filmon moved to occupy Carstairs’ territory on the Constitution.  He called an election in 1990 and secured a majority, and repeated the feat in 1995.  Gary Doer hung in there, losing three elections before he won three of his own.   The Liberals faded into the background.  With the federal Liberals gaining 45% of the vote in Manitoba six months ago, this was to be their time again after a 27 year frost.

Now, with both the NDP and Liberals performing poorly, and the Greens highly unlikely to convert growth into seats, this has the makings of a very strong PC majority. The NDP should retain a nucleus of members.  It doesn’t look like an apocalypse along the lines of New Brunswick 1987, Canada 1993, or BC 2001.  It may look more like Saskatchewan.  Core NDP seats in Winnipeg and Northern Manitoba should be held even if their popular vote dips as low as 25%.  As for the Liberals, they will look back on missed opportunity.

Update: Mainstreet released a poll April 16th that showed the race at 55% PC; 26% NDP; and with the Greens ahead of the Liberals in Winnipeg, indicating that protest voters may have found a new home.  Gordon Campbell’s BC Liberals had 57% in 2001 and took 77 of 79 seats.  I think the NDP in Manitoba will do better than the BC NDP did in 2001 which will save core seats.  They do better with older voters (who vote).

Green Leader James Beddome is running in Fort Garry / Riverview, a seat that went 55% NDP in 2011 but they will likely lose next week.  Voters went federal Liberal in 2015.  So, given his strong debate performance and momentum, it is not out of the question that the Greens win a seat.  The Alberta election saw an Alberta Party member elected along with a lone Liberal.  BC has a Green and an independent provincially, along with a federal Green MP.  Beddome’s riding is adjacent to River Heights which used to send Sharon Carstairs to the Legislature.  It will be a steep hill for the Greens to climb but Beddome will likely do respectably.