My post on by-election turnout earlier this week was picked up in the Vancouver Sun and Globe & Mail, proving that there’s a lot of interest in apathy.

In my earlier post, I stopped at 2004 in terms of comparing turnout to past BC by-elections.  Because I couldn’t help myself, I have now gone back to 1981 to see how engaged BC voters have been when it comes to mid-term voting.  If you’re not a political junkie, avert your eyes.  This is really geeky stuff.

Bill Bennett was successful in electing a government member in the 1981 Kamloops by-election.  It hadn’t happened since 1966 and it hasn’t happened since, unless the candidate’s name was Christy Clark.

Only one by-election had less than half the voters of the previous general election – that was in Vancouver-Quilchena in 1994 when Gordon Campbell was elected to the Legislature for the first time.  He won in a cakewalk so arguably voters didn’t see a lot of reason to vote.

Table 1: Turnout in by-elections compared to preceding General Election.  Asterisks (**) indicate a two-member seat.  Until 1991, BC had some riding that had two members with voters having the choice to vote for two MLAs on their ballot. 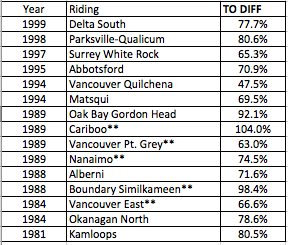 The other 14 by-elections saw a turnout of at least 63% of the previous general election.  Most of these races had a compelling storyline.

1981 Kamloops – The Socreds fought to hold their seat at a time when the margin in the 57(!) seat BC Legislature was razor-thin.  1984 Okanagan North – the then-unpopular Socreds succumbed to the NDP in a strong Socred seat.  The Socreds regained the seat in 1986.  Both of these by-elections had a turnout rate of about 80% of the previous election.

Turnout was at 65% to 70% of the previous election in three Fraser Valley by-elections between 1994 and 1997.  While the governing NDP did very poorly, they were not really at issue in these by-elections.  It was a brawl-for-it-all for the Free Enterprise mantle between the BC Liberals and the Socreds (1994), and the BC Liberals and Reform (1995 and 1997).  There was a lot at stake and voters, for the most part, turned out.

The Parksville-Qualicum 1998 by-election was more of a BC Liberal-NDP fight with Judith Reid eclipsing former (and future) MLA Leonard Krog.  This by-election was a verdict on Glen Clark at the time and had a turnout that was double of this week’s Coquitlam by-election.  Pitchfork time again.

In 1999, it was another BC Liberal-Reform fight when Bill Vander Zalm mounted his political comeback.  The BC Liberals rallied to win 2:1, with about twice the turnout of this week’s Coquitlam by-election.

The 1981-99 era had a lot of by-elections with high stakes and high turnout.  Even the low stakes by-elections had higher turnouts.  Why is it different now?  Perhaps voters are harder to get in a distracted world.  Media sources are more fragmented.  Voters are not herding toward BCTV (sorry Keith) like they used to, nor are they all opening the door in the morning to retrieve the morning Sun and Province like days gone by.  Fragmentation aside, the mainstream media seemed to great the by-elections with a collective yawn this time.  With less media interest, there is inevitably less chatter about politics at coffee-time and over the backyard fence and, ultimately, less turnout.

This all serves to reinforce my view in the earlier post that, unlike the Zalmy 1980s and Parksville in 1998, this week’s by-elections were not pitchfork-carrying affairs.  Low turnout indicates a lack of urgency and lack of consequence.  The turnout, and margin of loss, in Coquitlam-Burke Mountain was lower than in the neighbouring Port Moody-Coquitlam 2012 by-election.  The BC Liberals regained that seat, so there’s no reason to suggest they can’t do the same next year.  We’ll see.