I started off the week with a Monday am breakfast presentation of poll numbers from Greg Lyle of Innovative Research Group.  No doubt, all Canadians will be dining out on poll numbers for the next three weeks.  We’ll be stuffed like Thanksgiving turkey.

I worked with Greg on two occasions: with the BC Liberals from 1994-1996 where we triumphed by winning the popular vote, and from 2005-2010 when I was an associate with Innovative.  As I have grown accustomed, Greg – or ‘Professor Lyle’ if you will – came loaded with a blizzard of line graphs, stacked columns, and pie charts.  It was Power Point Palooza.  Political geeks like me go to these breakfasts instead of Burning Man.

You can’t walk down the street without running into a pollster these days.  But few pollsters dig into the numbers like Greg and share those insights with the public. Sure, you can get some version of the horserace on your next newscast, but Greg is asking – as the horses are in the 5th of 8 furlongs – what are the track conditions?  What are they feeding the horses?  What is the performance of the jockey?  Does the horse have the stamina to finish?  Should the horse be sent to the glue factory?  I’ve had a lot of ‘winning bets’ in the fifth furlong only to see my horse fade down the stretch.  Greg is focused on why the voters are responding the way they do.  That’s interesting stuff.

Here are three slides from his presentation and why they matter:

Is this a general election yet, or just a primary between the Liberals and the NDP as to which will be in the runoff with the Conservatives?  Greg asks who’s made up their mind versus who would like to hear more.

Only 26% of Conservatives would like to hear more while 42% of Liberals and 43% of NDP are open, not to mention 44% of the Bloc and 50% of the Greens.  As a succession of recent polls show (Nanos, Abacus, Innovative), the NDP are struggling to stay with the Liberals, in part because they are shedding support in Quebec and slipping behind in Ontario.  The key to 24 Sussex Drive for either Justin Trudeau or Thomas Mulcair is to win the primary and the research shows minds are still open.  However, it’s not a closed primary.  Some of those votes are open to the Conservatives too.

2.  The shifting support among values clusters

Greg’s research shows party support by values clusters measured on a two-dimensional scale: by left-right axis and a populism axis.  Populism is measured (my colloquial explanation) by whether one defers to experts or one puts more stock in the common sense of regular people.  You might say it’s Starbucks vs. Tim Horton’s.

Here are the numbers for these clusters:

Thus, you have some voters returning to natural homes, but you also have some lefties migrating to the Liberals too.

Interestingly, it is the non-populist voters that are the most volatile, according to Greg’s research, while the populist voters have not moved as much.    I expected the opposite to be true, but an explanation may be that populists have decided and moved on and “the Starbucks crowd” are debating their vote before they make it.

See the full value clusters deck which includes how each values cluster is constructed and defined.

3.  The Consistent versus the Ambivalent

I am highly interested in who is actually going to vote.  As I posted recently on the Lower Mainland transit plebiscite, there is usually a strong age correlation that peaks in the 65-74 age group.  Greg’s research offers an insightful analysis based on consistency versus ambivalence.

Essentially, he has analyzed the answers of individual respondents within the survey and categorized people based on who is consistent on responses, who is conflicted, and to what degree they are wishy-washy (eg. respond ‘don’t know’ to a lot of questions, undecided on vote).

About a quarter of those polled are perfectly consistent and likely have a plan to vote.  About 13% are, well, out-to-lunch and will likely not vote (in my opinion).  That leaves about 60% of voters who are on a continuum of mainly consistent to mainly ambivalent, and within that continuum, they are the ones that are more likely to say they would like to hear more. 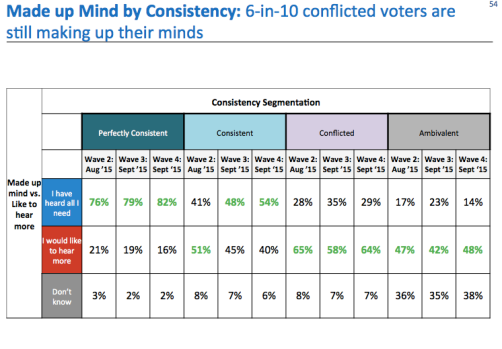 In the consistent-conflicted range, “would like to hear more” ranges from 45%-65%.  This reflects a lot of the Lib-NDP switchers.

But my starting point on this topic is who is going to vote?  Perhaps Greg will show these consistency segments by vote as whoever has the most ‘consistent’ supporters compared to ‘ambivalent’ supporters will have a turnout advantage.

In any event, analyzing survey responses to design such a segmentation is pretty cool.

In conclusion, a lot of polling is being digested in this election.  It’s good to see work that goes deep and is publicly available.  This is different than what political parties are likely doing internally, but if you’re in the peanut gallery, and you’re watching a horserace, then you can dig into it while mixing your metaphors, and see how it all turns out on October 19th.