It could be a long night.  Results will be coming in rapid fire from Cape Breton to Cape Scott.  How to make sense of it all?

Here are five charts to help you follow along on election night. 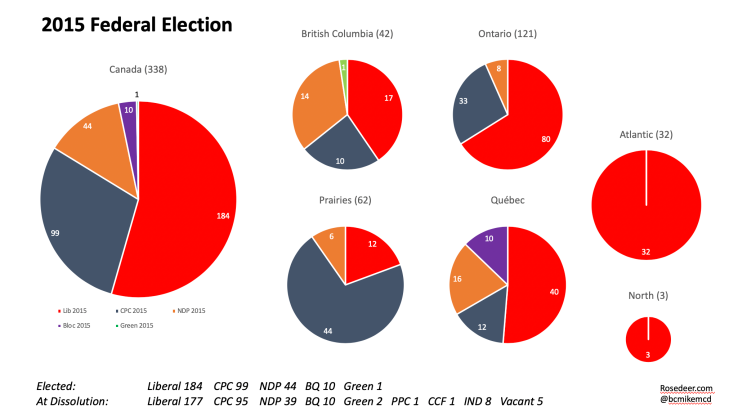 In 2015, Justin Trudeau’s Liberals took 184 of 338 seats – a majority is 170.  As the chart above shows, the Liberals swept the Atlantic and North (35 for 35), took a majority in Québec, two-thirds of Ontario, and a bigger slice than usual on the Prairies and B.C.

During the campaign, I wrote about the potential pathways to power for the Conservatives, based on historic examples from Diefenbaker to Harper.

Winning 160 seats is a ‘stretch goal’ tonight, and if Andrew Scheer’s Conservatives pull it off, it will likely be because they won three-quarter of the seats from B.C. to Manitoba, and took at least half of the seats in Ontario.

Chart 3: Liberal pathway to a majority 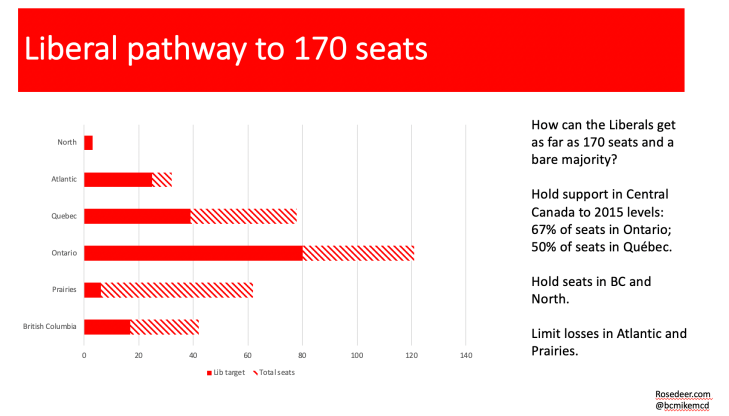 No one is really talking about the prospect of a Liberal majority and appears quite unlikely unless there is a last minute surge.  I looked at the ways Liberals have won in the past. A minority may look like Paul Martin’s win in 2004, but if they come close to, or pull off a majority, it may look like this:

No party has won a majority government with less than 38% of the popular vote.  It’s not impossible, but it hasn’t happened yet.

No party has won a plurality of seats in past 60 years with less than 35% of the vote.  Perhaps tonight is that night.

See What is the magic number for a majority in #Elxn43? and A deeper dive into the conditions for majority and minority governments.

The first campaigns of Pierre Trudeau and Justin Trudeau were the high water marks for Liberals in British Columbia between 1968 and 2015.  During most of that time, the leading conservative party had the plurality of seats, with two NDP exceptions.  Will the Liberals be able to hold 2015 gains tonight? Will the Conservatives return to historic patterns? Will the NDP hold its own and surge to a plurality in B.C.? Will the Greens add to their current tally of two seats?  And what about JWR?

See two posts on the BC landscape:

Tune in tonight to Global BC’s election night coverage.  See you there.