Did the Conservatives crash?

No. They had 96% of the votes they received when they won a majority in 2011.  Had the number of voters stayed the same, they would have received 36% of the popular vote.

However, the market expanded.  An additional 2.7 million Canadians voted, pushing voter turnout from 61.1% to an estimated 68.5%. 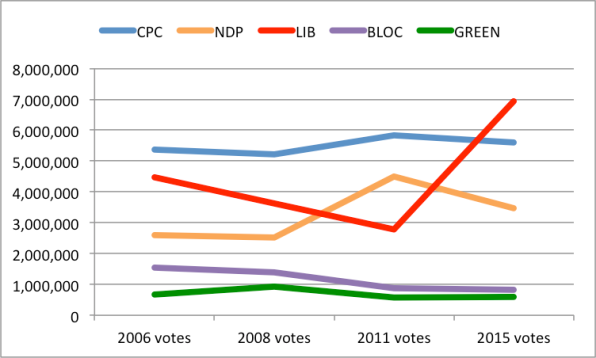 The blue line is remarkably consistent over four elections, ranging from a low of 5.2 million (2008 minority CPC government) to 5.8 million (2011 majority CPC).  The total number of CPC votes in 2015 was higher than minority governments in 2006 and 2008.

The absolute number of votes for the Greens has declined and levelled off.  The Bloc continues its decline in overall voters.  More seats this time, but that was thanks to a four-way fight in Quebec.

The NDP can take some solace that they had the second most votes in the history of their party, almost a million more than Jack Layton’s campaigns in 2006 and 2008, but over a million less than the breakthrough 2011 campaign.

Then there’s the Liberals.  After successive declines, 2015 blew the roof off of their support eclipsing the steady Conservatives.

On the surface, the 250% increase in Liberal support can be attributed to stealing market share from the NDP but moreso in terms of increased voter turnout overall.